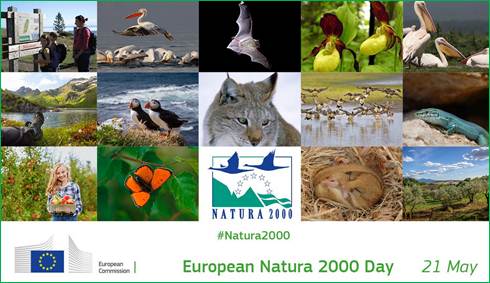 The EU has been supporting the conservation of our unique and precious natural heritage for 25 years. To celebrate this milestone and mark a quarter century of the EU Habitats Directive and Natura 2000 Network of protected areas, the 21st May is officially designated as “European Natura 2000 Day”.

European Natura 2000 Day relates to the 21st May 1992, when both EU Habitats Directive and LIFE programme were approved. This Directive together with the Birds Directive (approved earlier in 1979) became a base of Natura 2000 Network and has successfully contributed to the preservation of our unique European natural heritage. Consisting of more than 27 000 sites, the Natura 2000 Network became one of the EU’s most outstanding achievements.

Declaration of the 21st May as the “European Natura 2000 day”

Photos, video and programme of the event are available.

In order to celebrate and promote the Natura 2000 Network, a number of local events in different Member States will be organised. More information about the events.

This website uses cookies to improve your experience while you navigate through the website. Out of these, the cookies that are categorized as necessary are stored on your browser as they are essential for the working of basic functionalities of the website. We also use third-party cookies that help us analyze and understand how you use this website. These cookies will be stored in your browser only with your consent. You also have the option to opt-out of these cookies. But opting out of some of these cookies may affect your browsing experience.
Necessary Always Enabled

Any cookies that may not be particularly necessary for the website to function and is used specifically to collect user personal data via analytics, ads, other embedded contents are termed as non-necessary cookies. It is mandatory to procure user consent prior to running these cookies on your website.