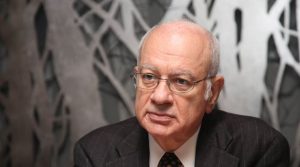 The time has come for the International Monetary Fund to make up its mind on Greece, according to the country’s economy minister.

The path to recovery runs sequentially through completion of Greece’s bailout review, debt relief and then admission to the European Central Bank’s quantitative easing program, said Dimitri Papadimitriou, an economist who joined the government this month after a career championing alternatives to the macroeconomics espoused by the IMF. Now, the Washington-based fund must decide whether the Greek recovery will happen with or without it, he said in an interview.

“The IMF has changed its opinion many times,” said Papadimitriou, 70, who spent almost five decades in the U.S., where he is on leave from his post as president of Bard College’s Levy Economics Institute.  “It’s very hard to know whether in fact they want to be in or they want to be out. I think they do want in, and we want them to be in.”

Greek markets have rallied this month on expectations creditors may finally ease the country’s debt at a Dec. 5 meeting of euro-area finance ministers. For the International Monetary Fund to stay on board — a key demand of countries such as Germany and the Netherlands — such a deal must assuage the fund’s doubts about the viability of Greece’s medium-term fiscal targets. The country’s economy has contracted by about a quarter since the start of the global financial crisis in 2008.

Officials representing Greece’s European creditor institutions and the IMF left Athens on Tuesday without concluding the country’s bailout review. Greek government spokesman Dimitris Tzanakopoulos implied that the IMF was setting obstacles to completing the bailout review. The government and the IMF remain apart on labor markets, which the fund wants to liberalize further while the government wants to restore some collective bargaining.

“We are standing firm because at the end, those reforms don’t really account for any growth,” said Papadimitriou, arguing that the IMF’s insistence on them has become a matter of dogma for the fund. “If you look at the projections that they have made, they have always been wrong. And we’re talking about being really wrong. However, if you have followed this procedure for so many countries, it is very hard to change it.”

Dutch Finance Minister Jeroen Dijsselbloem, who chairs the Eurogroup of euro-area finance ministers, told Bloomberg on Thursday that officials representing the European creditor institutions and IMF have made much progress in talks with Athens, but that further reforms are being looked at in labor markets and privatization. The Eurogroup has additional debt-easing measures ready “if needed” for when the Greek program comes to an end in 2018, he said.

“At the end there’s always an agreement,” Papadimitriou said in the interview on Thursday. “It’s not an agreement that everybody likes, but I think it’s an agreement which each party can live with, given their own particular needs.”

At Bard College, Papadimitriou turned the Levy Institute into an intellectual refuge for economists from the heterodox, post-Keynesian school of thought, such as Wynne Godley, who predicted the euro crisis in 1992, and Hyman Minsky, known for his financial instability hypothesis.

Papadimitriou helped those ideas gain traction after the financial crisis rocked the orthodoxy in macroeconomics, according Stephen Kinsella, an economics lecturer at the University of Limerick. Used copies of Minsky’s 1986 book, “Stabilizing an Unstable Economy,” would sell for more than $300 on Amazon before Papadimitriou got it back in print.

“He’s a great example of an intellectual entrepreneur,” said Kinsella. “He’s the kind of guy who can get things done and put groups of smart people together, and a lot of people do credit him with giving much more currency to Minksy’s ideas than they would have had otherwise.”

Papadimitriou said Prime Minister Alexis Tsipras brought him into the government to map out a strategy for the country to achieve “sustainable and inclusive growth.” That means growth which doesnΆt increase inequality, and it also means creating a business-friendly environment, something that Papadimitriou says the left-wing Syriza government is doing despite its reputation to the contrary.

“I’m not a member of the party and therefore I can say “pro-business” without having to worry or apologize for it,” he said. “Everyone recognizes that investment is the most important issue, given the fact that we are in the euro zone and we can not do anything else but to respect the rules of the euro zone and the European Union.”

This website uses cookies to improve your experience while you navigate through the website. Out of these, the cookies that are categorized as necessary are stored on your browser as they are essential for the working of basic functionalities of the website. We also use third-party cookies that help us analyze and understand how you use this website. These cookies will be stored in your browser only with your consent. You also have the option to opt-out of these cookies. But opting out of some of these cookies may affect your browsing experience.
Necessary Always Enabled

Any cookies that may not be particularly necessary for the website to function and is used specifically to collect user personal data via analytics, ads, other embedded contents are termed as non-necessary cookies. It is mandatory to procure user consent prior to running these cookies on your website.